Chances are, if you are using cloud, that you have already scripted your infrastructure using Cloud Formation, Azure Resource Manager or frameworks such as Terraform and Serverless Framework.

When using the the above frameworks you declare your infrastructure via a yaml or json file. However, there are frameworks that permit to do the same with programming languages. For example AWS Cloud Development Kit or the topic of this post Pulumi.

Using code to define infrastructure seems to be splitting opinions a bit, as a fairly recent Hacker news discussion attests.

Personally I used all of the frameworks I mentioned in the introduction, save for AWS CDK. Cloud Formation and Azure Resource Manager can be tedious, but things improve when using Terraform or Serverless Framework.

Pulumi is as easy to use as Terraform or Serverless Framework. Where it differs is, that the experience, when using a modern code editor, becomes a little bit more smooth. For example, code completion helps you to trawl through documentation a bit less often. When needed you can quickly write helper functions in a language you already know. Code reuse is also easy, and you could imagine scenarios where you define standard infrastructure parts and distribute them using a package manager.

Not everything is perfect though. Using code could be a deal breaker for someone without a developer background. The comunity using Pulumi is smaller compared to Terraform’s and then there is the pricing; Pulumi is not free for everyone, but before you dismiss it do check their pricing page. And lastly, some might take issue with the fact that their stack’s metadata is stored somewhere in the cloud, but there is a way around that too.

In the rest of the post we are going to go through defining and deploying a simple statically hosted SPA app with Azure Function backend.

NOTE: If you are using Windows, I recommend installing everything into WSL. Windows version of Pulumi suffers from some glitches when uploading files to static web site.

First of all let’s start with installing Pulumi. Follow the instructions on this page to install Pulumi.

Setting up a new Pulumi project

You don’t need to create a new project for what I am going to describe in the rest of the post, but if you are starting from scratch and wanted to use C#, this is what you would need to do:

This triggers a creation of a C# Pulumi project. The CLI will ask you a few questions, including to login or create an account (free for individual use), and at the end you will have a C# project ready to have code added to it.

The two important files generated by the CLI are Pulumi.stackname.yaml and MyStack.cs. MyStack.cs is where our code goes, while the former defines some properties of the stack such as the Azure region. Note that the region cannot be modified via the yaml file. You will need to destroy the stack and create a new one if you need to change the region.

Again, as mentioned, to run the example we are going to work with in this post you don’t need to create a new project. You will find the instructions on how to deploy the example later in the post.

Let’s script and deploy a statically hosted SPA app with Azure Function backend! The full for the Pulumi project and the sample app that I am going to explain is available here. Be aware that MyStack.cs has been renamed to BalthazarStack.cs.

To deploy the example just described, clone the source code from here, then execute:

Pulumi supports most popular CD systems and offers generic ways to integrate it into a CD not on the list. For my little project I used their Azure DevOps integration. To use Pulumi in Azure DevOps you need to first install their extension.

I decided to have a preview step first, and then, after a manual approval trigger the actual deployment. Before you continue head over to your account at pulumi.com and generate an access token. Store the token value into a variable named PULUMI_ACCESS_TOKEN.

The definition of a preview task looks like this, I placed this step in the build stage of my pipeline definition:

To achieve the manual approval I added na approval step to BalthazarTest environment in Azure DevOps. Azure Devops approvals are beyond the topic of this post, but if you are interested, you can read more about it here.

The full pipeline definition with the above steps is here.

When this pipeline is run, we first have a preview step and I can either check build logs or head over to pulumi.com, to see what the changes are going to be:

And the deployment will be on hold until I approve it: 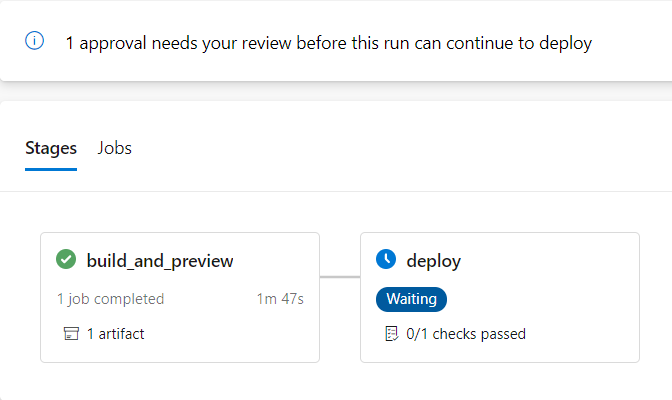 Pulumi has earned its place in my personal tech stack. It is free for individual use and personally I think it is not too expensive for team use either. The final judgement is up to you though. Do play around with it, perhaps you will like it just like I did.